Day four of NFTS Springboard Week 2020 continued apace with an unmissable Masterclass focusing on the work of one of Britain's most distinctive filmmaking talents, the Oscar and BAFTA winning writer, director and producer, Asif Kapadia. More recently known for his trilogy of internationally acclaimed documentaries; Senna, Amy and Diego Maradona, Asif’s credits also include Mindhunter, The Sheep Thief, Ali and Nino, Far North and his first feature, The Warrior which was hailed as ‘an astonishingly ambitious, terrifically confident debut'.

In conversation with NFTS Head of Screen Arts, Sandra Hebron, Asif drew on many anecdotes from his colourful career, spanning his own early experiences while at film school, his love of magical realism and the importance of having resilience.

Recalling his first humble experiences of being on a film set when he was “the one carrying metal equipment boxes around”, Asif realised working in film was his calling when he saw that people around him “would freeze during a problem. That was when I woke up! I knew I could solve the problem. If I have a deadline it works for me, it leads to me getting nervous energy. I enjoy pressure situations, on set I operate at 80 to 90% percent, whereas I think in everyday situations I’m at 50%.”

During his time at the Royal College of Art (RCA) he would shoot on rolls of 16mm film and Asif touched on how technology has moved on since. “I still use the same techniques I did back in the day which is to plan scenes in advance before turning over. The danger of digital is the temptation to shoot loads and then think in the edit. If you can plan ahead I think it’s always better.”

His RCA graduation film The Sheep Thief was inspired by an old bible story Asif was told at primary school, which he reimagined in an Indian setting. Set and shot in India, Asif was determined to make the film his way despite resistance from many quarters that might have seen a less strong minded personality cave in to pressure. When looking for advice on how to best work with the non-professional actors he wanted to cast from the streets, there was only one person who sprung to mind. “I managed to get Ken Loach on the phone and he gave me a 15 point list on how to get an authentic performance.” 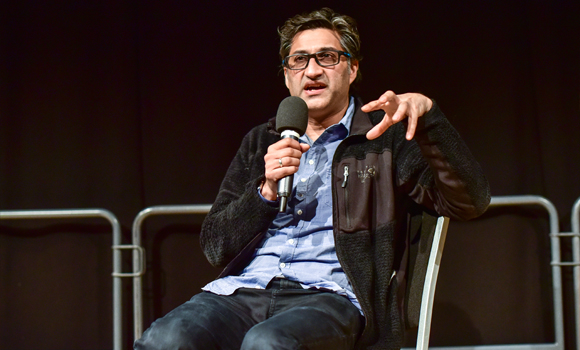 The Sheep Thief saw Asif collaborate with two NFTS graduates for the first time, Academy Award winning composer Dario Marianelli and Director of Photography (DOP) Roman Osin, both of whom he has continued to work with ever since. “Your job as filmmakers is to collaborate, that’s the beauty of filmmaking.”

Filming in extreme heat in the desert of Rajasthan while making The Sheep Thief, led Asif to muse on the myriad of difficulties filmmaking can present and the importance of having resilience: “There were people who left the shoot and they didn’t carry on working in film and television but the ones who stayed and stuck it out went on to do amazing things. You need so much stamina to keep going while keeping your head and body together somehow.”

His first feature, The Warrior tells the story of a fierce warrior who changes the direction of his life after a mystical visionary moment. It was inspired by an idea fleshed out to stunning effect from a three line footnote Asif came across in an old Japanese samurai story about family morals. “Sergio Leone was a big influence on me for that film. I love the Western genre, the wide expanses, the economy of the characters. It was an amazing period where the DOP Roman [Osin] and I had lots of time to plan.”

Once The Warrior was finished in 2001, it started making waves and Asif described how his phone was red hot taking calls from three of the world’s biggest directors! “The dream scenario came from making that film. Martin Scorsese, Terrence Malik and Ridley Scott all got in touch separately; they all loved it and I ended up meeting with each of them!”

Asif highlighted to the students the genesis and processes behind the making of Senna, Amy and Diego Maradona and revealed he still doesn’t know if Maradona has seen the story of his life. The film was nominated for Best Documentary at the 2020 BAFTA Film Awards. Asked by a student what notes he was provided with during its making, Asif was amused by the irony of his answer: “I was given no notes at all. I know Maradona didn’t like the poster, he said on Instagram ‘don’t see the film’ so I guess that was my one note!”

Asif’s work on Senna and Amy brought him to the attention of renowned director David Fincher by way of none other than Brad Pitt and Steven Soderbergh, Fincher’s best friends who were both huge fans of Asif’s films. “The detective work that pieced Senna and Amy together plus my understanding of fiction meant I got the call from David to work on Mindhunter. Next thing, I’m out in Pittsburgh shooting. One thing leads to another and another.”

Closing the Masterclass, Asif left the first year students with some essential advice for maximising their time at the NFTS. “Learn by doing, learn by making. Use your time here, the equipment, the facilities. Find out about the other courses, explore the ones that are the opposite of what you do. Push yourself, don’t play it safe, push it to the ultimate!”