Monday 27 June: The winners of the 2022 Royal Television Society (RTS) Student Television Awards have been announced and of the 11 National Film & Television School (NFTS) nominations, four have been named winners alongside three graduates being awarded in the Postgraduate Craft Skills categories!

The RTS Student Television awards are designed to highlight the talent, potential and enthusiasm of students across the UK, celebrating the exemplary audio-visual work they create.

Check out the full list of National Film & Television School wins below: 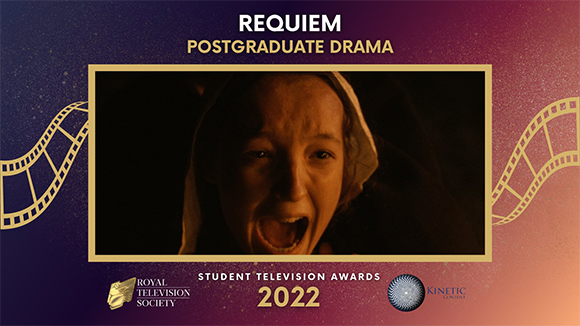 Sound - Do Not Feed The Pigeons – Joe De-Vine

The National Film and Television School would like to offer a big congratulations to all our students who contributed to these award-winning productions and to the three graduates awarded for their exceptional craft skills!

If you’re interested in receiving specialist training and collaborating with students across specialisms like Visual Effects, Production Management, Model Making and Sound Design to create work that gets seen by leading figures within the television industry, apply for an NFTS course today!