Day three of Springboard Week 2020 saw our new first year students enjoy an open and honest session with an inspiring panel of NFTS alumni. Five graduates returned to advise how the new intake of students can ‘Get The Most Out Of The NFTS’, delivering invaluable insights, student hacks and recalling their own beginnings at the School.

The session started with each of the graduates going back in time to remember their own first impressions of the NFTS and the hopes and dreams they envisioned as a new student.

Edward: “I was looking forward to finding a way of sharing my voice. Before coming, though I was working in the industry, I felt frustrated no one was listening to my ideas so I wanted to show people what I could do, find ways of telling the stories I knew I could tell well and have more creative control.”

Paulo: “The beginning was hard. I moved from Brazil to Beaconsfield, it was January and it was so cold! But it was formative. From the beginning I made amazing friends. I wanted to get back in touch with my creative side. I didn’t have any intention to stay and I’ve been in the UK 10 years now.”

Laura: “I was completely petrified and had classic Imposter Syndrome, thinking they had made a mistake letting me in! I knew very little about game development but I was hoping the course would get me into the industry and it did. (In 2018 Laura was nominated for the Women in Games Rising Star award.) I was just so happy to get in, my Dad had given me a prospectus when I was 14 so it was always in the background for me but actually getting in was a dream come true.”

Segun: “Before starting, a Sound Design graduate advised me that the relationships you build here could change your career. Being at the NFTS gave me time to develop as a composer and essentially a film-maker. Understanding how others work influences your own work. I learnt so much from the seven other composing students on my course by watching how they did things.”

Vanessa: “It felt like such a privilege to shoot every day, the teamwork that goes into working with your fellow students, the critiques we were able to get from industry professionals, just making films and learning.”

How did the NFTS contribute to what the graduates are doing now in their current careers?

Paulo: “Developing relationships was the key thing. When Lewis Arnold (NFTS Directing Graduate whose credits include Des, Humans and Broadchurch) got his break, he got in touch and that was my ticket in. It all stemmed from us working well together here. Attending the weekly screenings and seeing everyone else’s films taught me how to talk about films and express myself.”

Laura: “Doing a Games Design course within a film school meant it was so helpful once I was on the outside that I’d had the opportunity to collaborate with other departments. There is so much synergy between games, film and television, if I hadn’t gained the experience of working with other disciplines while I was here I probably wouldn’t have worked on the David Attenborough VR project Hold the World. The director of that worked in film and I understood those boundaries. I got my first job with Dave Ranyard, who left Sony to start his own studio. I showed him one of my games whilst here on site and was employed before I graduated!”

Segun: “Building relationships. Shola Amoo (NFTS Screenwriting Graduate and writer-director of The Last Tree) wasn’t in my year but we connected over social media and were then introduced in the NFTS canteen. Later, he was crowd funding for his first feature and I reached out to say I’d love to be involved. That was the start of our working relationship and we still work together now.”

Vanessa: “It was such a joy seeing a fellow student compose music to my scenes. You don’t get that opportunity in real life. Think about your portfolio and try to get in on projects outside of your course with people that are like minded. Extra-curricular things are just as important as doing the course.”

What top tips did the graduates have to offer the new students?

Edward: “Try to be around the School as much as you can. Go to all the screenings, use the film library. There are so many good Masterclasses. Use and see it all, you’ll never have access to anywhere like it again!”

Paulo: “I worked in the bar and took on responsibility for playing the clips  during Masterclasses – which meant I would be sitting right at the front and get to talk to the guests. I got involved in everything and it was totally worth it.”

Laura: “Get out there, talk to people, there are so many innovative things happening in the Games department, get involved!”

Segun: “Meet people and make friends. Make the most of Screen Arts each Monday. It will stretch your film language and knowledge. It really informed me as a storyteller.”

Vanessa: “Keep your content organised and catalogued. Have your website up and running, you’ll meet people at events so you need to be ready to show them your work. It’s a missed opportunity if you don’t as it can open up massive opportunities.”

Edward: “I’ve since returned to the NFTS as a tutor and the one tip I would pass on is ‘listen to feedback!’ The tutors have really valid points to make, they are industry professionals. I wish I had listened more, don’t let ego get in the way. I didn’t get that into my head quickly enough. Be willing to show your work and be open, it will make your films better!”

Segun: “You learn things you can never learn anywhere else at the NFTS.”

It was time to take questions from the floor, with one student keen to know how the rise of streaming is changing the current landscape.

Paulo: “There is definitely more content being produced, there’s more work so it’s impacted the industry in a good way.”

Laura: “It’s been interesting for games distribution and tech developments. There are more opportunities for young people in the games industry. Just don’t get stuck in your ways, you’ll become irrelevant very quickly.”

Segun: “People want a distinctive sound, an identity people can relate to, more of a focus on just one thing and that’s across all genres from drama to factual to documentaries and beyond.”

With the session coming to a close, what final nuggets of advice would the panel like to share with the new intake of students?

Vanessa: “Show your work! The screenings of your films can be emotionally challenging but try to open yourself up to that vulnerability as the feedback is invaluable. It can be very stressful so do try to take care of yourself. Everyone will find their own path eventually, don’t have crazy expectations about getting a big break, just try to enjoy the process.”

Edward: “Don’t overstretch yourself - keep your work short! If your work is short it will take less time to impress and demonstrates style and tone. Hone in on your vision and voice and do more films if you can.”

Segun: “Look after your mental health while you’re here. It’s not a competition. If you’re here, you’re already great and you can all learn from each other.”

Paulo: “Everything feels like the most important thing in the world when you’re in it but don’t forget to keep perspective. It’s not the last film you’re going to make, it’s just the start. Enjoy the process and work hard!” 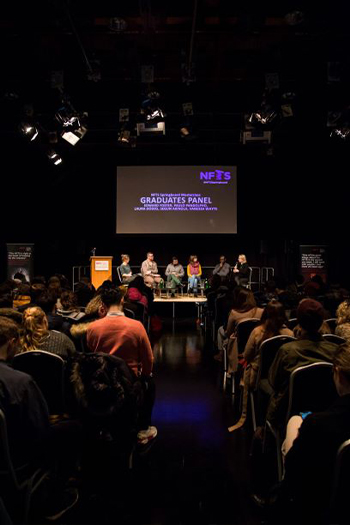 A huge thank you to Edward, Paulo, Laura, Segun and Vanessa for giving up time in their busy schedules to return to the NFTS and impart their knowledge to the next generation of graduates.