The winners of the eagerly awaited 2020 British Independent Film Awards (BIFA) were announced in a star studded online ceremony on 18 February. From a total of 27 NFTS alumni nominations, we are thrilled to announce six were named winners in five categories at the awards, hosted by Harry Potter star Tom Felton, with Zendaya, Daniel Kaluuya, Emma Corrin and Riz Ahmed among the stellar line-up of presenters. 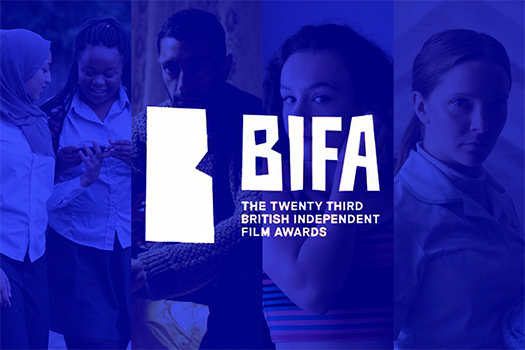 Leading the charge across multiple categories was Directing Fiction alumna Rose Glass’ acclaimed debut psychological horror, Saint Maud. Nominated in an incredible 17 categories, the film took home The Douglas Hickox Award (Debut Director) and Best Cinematography. Saint Maud follows a hospice nurse who becomes obsessed with the former dancer in her care, believing she must save her soul.

Rocks, directed by NFTS Directing Fiction alumna Sarah Gavron was nominated across 15 categories and won across four of them including Best Independent British Film. Rocks is a beautiful coming-of-age drama that explores a young girl’s difficult circumstances and her tight knit relationship with her friends.

Weaving together storytelling, music and immersive sound to guide audiences through an emotional landscape, The Long Goodbye has already received several prestigious accolades.

Perfect 10, written and directed by NFTS Directing Fiction alumna Eva Riley and produced by Producing alumnus Jacob Thomas was nominated across three categories, winning the Raindance Discovery Award. Perfect 10 is Eva Riley’s debut feature, following an aspiring teen gymnast whose world is turned upside down with the arrival of the half-brother she never knew she had.

Finally, alumna Sara Lima won Best Sound for her Sound Recordist work on The Reason I Jump, a documentary film that examines the lives of five young people who live with autism spectrum disorder.

BIFA 2020 was a huge success for NFTS alumni and we are so proud of their achievements!

The full awards show is available to stream online

If you want to learn how to make award-winning work, apply today to an NFTS MA, Diploma or Certificate course to start September 2021 or January 2022.