The National Film and Television School’s (NFTS) Cinematography Department was handed the Special Achievement Award at the British Society of Cinematographer’s (BSC) Awards in London on Saturday 15th February.

The award is presented at the discretion of the BSC Board and is given to a person or persons for special achievement in promoting the aims of the BSC and the art of Cinematography. 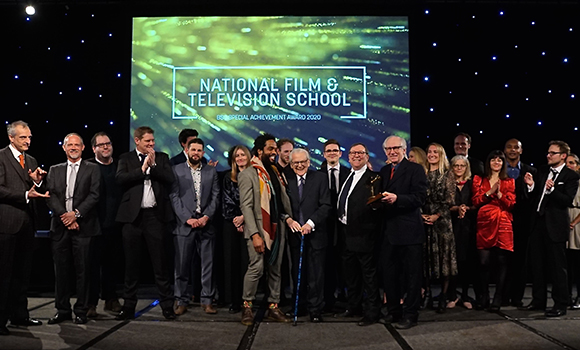 During the course of the evening, Brian Tufano (Head of Cinematography 2003-2016) was awarded the BSC’s Lifetime Achievement award for his body of work, which includes films such as Trainspotting, Billy Elliot, Shallow Grave and Adulthood.

To complete the night, NFTS Cinematography alumni Roger Deakins and Jakob Ihre were awarded the Film and Television prizes; Roger for his Oscar-winning work on 1917 and Jakob for his Emmy-winning work on Chernobyl.

Stuart Harris, Co-Head of Cinematography said: “It was also a chance to pay tribute to those that came before us such as Walter Lassally and Brian Tufano, both of whom have helped shape the course that we run today”.

Jon Wardle, NFTS Director added: "This award is brilliant. I’m so pleased the BSC have chosen to honour my amazing colleagues in Cinematography. It is testimony to their hard work and education and to the work of numerous graduates who have gone out and made their mark on the industry."

The National Film and Television School was thrilled to see alumnus of the School and world renowned cinematographer Sir Roger Deakins awarded a knighthood in the Queen’s New Year Honours list!

Behind the Scenes of NFTS Production Design MA: "It's Great To Be Back On Set!"

As one of their first projects back at the NFTS after returning from lockdown, our first year Directing Fiction, Cinematography and Production Design students teamed up for a project titled

The National Film and Television School (NFTS) announces that Roger Deakins is the winner of the 2018 ‘Sue Gibson BSC, Cinematography Award.’ Roger Deakins at a recent NFTS masterclass