The National Film and Television School is renowned for its incredible Masterclass programme, regularly drafting in an array of acclaimed names from across the film and television industry for the benefit of its 500 plus students.

Closing its doors in March due to the pandemic, the NFTS was keen to keep students feeling inspired and supported while they studied from home. The School reached out to over 50 high profile names and past alumni including Sam Mendes, Noel Clarke, Elisabeth Moss, Stephen Fry, Sally Wainwright, Edgar Wright, Danny Boyle, Malorie Blackman, Marielle Heller and a host of others who all signed up to deliver exclusive Virtual Masterclasses from their own homes.

“Here’s the main thing about film and showbusiness, almost everybody quits. So you have to be willing to ride the rollercoaster." Judd Apatow, Producer, Writer, Director

The NFTS has now released a special ‘Masterclass of Masterclasses’ 90 minute video montage, featuring highlights from the past few months. Students tuned into Zoom in their hundreds to hear directly from some of the world’s leading directors, producers, cinematographers, screenwriters and costume designers. From Spike Jonze voicing his thoughts on cinematography to Sally Wainwright on instinct as a writer and Ricky Gervais on the importance of having honesty as a filmmaker, the compilation is a goldmine of insight and advice on how film and television is made and is available to watch exclusively via Empire's website here: empireonline.com

Head over to @empiremagazine to watch the full film now #NFTS https://t.co/baXWBc8yAF

NFTS Director Jon Wardle reflected: “Lockdown was very challenging but one thing that kept us all going were the amazing Masterclasses. I’m really pleased to share this incredibly special montage with the wider world and once again, I’d like to thank everyone who helped us out through a very difficult period, we are forever grateful.” 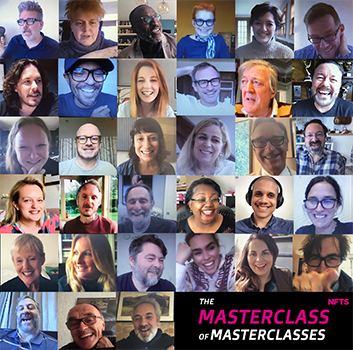 The NFTS would like to extend a huge and heartfelt thank you not only to all the people featured in the Masterclass of Masterclasses film, but to each and every one of the film and television makers who made time to speak to our students during lockdown. For further information visit bit.ly/2KNenWp