14 September 2021: The UK film and television industry were reunited after a long hiatus to celebrate the golden anniversary of the NFTS at the School’s 50th Anniversary Gala, held at Old Billingsgate in London on Tuesday 7 September.

Sponsored by BBC Studios, the Gala is the School’s principal fundraising event and is critical in providing financial support to help meet the many challenges of providing the world leading training the NFTS is globally renowned for.

Actor, comedian and television presenter and host for the evening Adil Ray took to the stage at 8pm to kick off the celebrations, joking that as a Good Morning Britain presenter, it was already three hours after his usual bedtime.

Over 30 NFTS students were on hand to help run the Gala and the night also provided them with a valuable opportunity to network and connect with industry contacts.

A total of over £270,000 was raised on the night through the generous support of industry guests, delighted to be together again after so long apart. Guests included key figures from Channel 4, BBC Studios, Sky Studios, Netflix, Disney, Neal Street Productions, All 3 Media, Framestore, World Productions and many more.

Attendees were encouraged to pledge funds to support students through their studies at the NFTS and make a life changing impact on emerging talent and the career of a young film, TV or games maker. A pledge of £7,000 could pay for half the cost of a student attending the NFTS for a year. £1,000 could contribute towards upgrading essential equipment and facilities while £100 could cover the cost of hiring props for a student’s graduate film – their industry calling card. 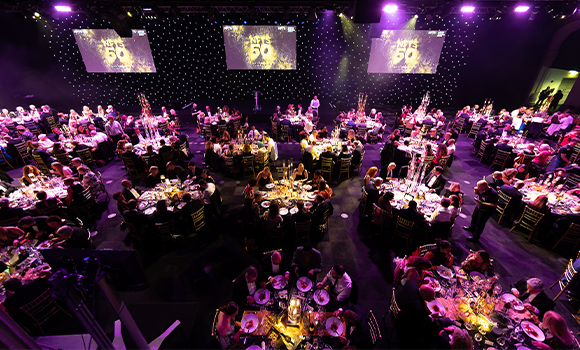 During the evening, a new scholarship honouring the pioneering achievements of Film4’s Sue Bruce-Smith was announced and NFTS President Lord David Puttnam made an impassioned plea to secure the future of the creative industries. Lord Puttnam movingly recounted a story about the survival of the NFTS when it faced government closure in 1979 and congratulated the School on its extraordinary success since.

Compered by Adil Ray, the NFTS 50th Anniversary quiz, sponsored by IMDB was fiercely fought as competing tables tested their general knowledge of film, television and games and the NFTS over three rounds. The quiz was won by Shorts TV who clinched the title of the winning team - congratulations to all involved!

Throughout the night, a silent auction took place where guests could bid for a wide range of items including tickets to the upcoming world premiere of No Time No Die, Star Wars memorabilia, a personalised drawing by Mark Baker, NFTS alumnus and creator of Peppa Pig, a signed script and prop from The Crown, and tickets to the red carpet gala screening of the 65th BFI London Film Festival among many other exclusive items.

Jon Wardle, NFTS Director said: “It was really wonderful to see so many friends and supporters from across the UK film and television industries at the NFTS 50th Anniversary Gala. Being back together in person felt very special after many long months of lockdowns. We are so grateful for the generosity and support of the industry. Together we can make a real difference to the next generation of British screen talent and help scale up the possibilities of what they can achieve over the next 50 years.”

Apply for an NFTS course today, starting January 2022 and find out for yourself the incredible impact this fundraising event makes on our courses.
nfts.co.uk/places-available