The participants for the UK-Canada Immersive Exchange, a new talent development and co-production programme for UK and Canadian immersive technology creatives and producers, have been selected. Twenty-four participants – 12 from the UK and 12 from Canada – were chosen from nearly 500 applications. They include six creative leads from each country – a mixture of artists, filmmakers, theatre directors and visionaries – as well as six creative producers from each country, who bring with them an impressive and varied range of experiences from across the creative spectrum.

The pioneering programme between the two countries, both recognized as leaders in immersive production, will for the first time provide structured opportunities for international collaboration and knowledge exchange in this important growth area for the arts and creative industries. 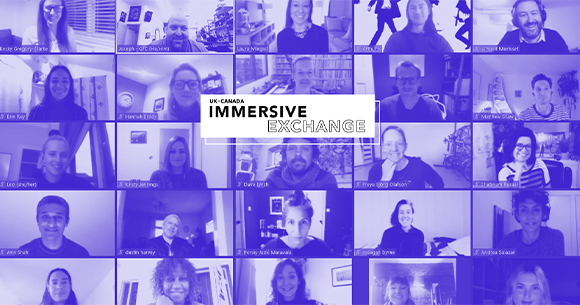 “We’re so delighted at the positive response to this call, and to have found such an incredible group of talented individuals from both sides of the Atlantic to take part in our immersive programme,” said Becky Gregory-Clarke, Program Co-Lead, UK-Canada Immersive Exchange and Head of Immersive, StoryFutures Academy. “In an unprecedented year, it’s more encouraging than ever to see such an enthusiastic group of people eager to overcome all the barriers of international working and come together to produce something so creative and exciting. We can’t wait to see what concepts they come up with.”

Throughout the initial Talent Development stage of the programme, which began on 9th November 2020, the 24 participants are brought together in the same virtual spaces to collaborate and engage in weekly creative, content and business-focused sessions. Additionally, all participants receive a fixed development grant of £2,000 (CAD 3,400) to contribute towards their time spent on the talent development stage. In the latter stage, the participants can pitch for co-production financing, with a total fund of up to £300,000 (CAD 510,000) available between the countries. This will fund a mixture of binational co-productions between £25,000 (CAD 42,500) and up to a maximum of £100,000 (CAD 170,000). The co-production stage will begin in March 2021, and the programme will conclude with final projects delivered by November 2021. 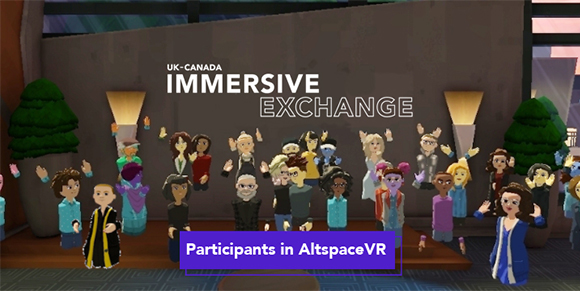 “The immersive storytelling industry continues to be pushed forward by creators motivated to build for unforgettable experiences. The diverse mix of talents and imaginations among our cohort will help shape the unique content that will be developed from this programme,” added Laura Mingail, Program Co-Lead, UK-Canada Immersive Exchange, on behalf of the Canadian Film Centre. “From day one, we have been able to meet in shared virtual environments. Immersive technologies are as much tools to connect audiences to stories as they are to connect creators across the world to build relationships and collaborate.”

The UK-Canada Immersive Exchange is supported by an international partnership between StoryFutures Academy (run by the National Film and Television School and Royal Holloway, University of London), Arts Council England, the Canada Media Fund, the Canadian Film Centre’s Media Lab (CFC Media Lab) and the Canada Council for the Arts. Together, these organizations selected the following creators:

For more information on the UK-Canada Immersive Exchange, please visit: