StoryFutures Commissioned for UK-Wide Festival Of Creativity in 2022

StoryFutures Academy run by Royal Holloway, University of London and the National Film and Television School (NFTS), is celebrating being commissioned as one of 10 creative teams to develop its ground-breaking project into full production for next year’s Festival UK*2022.

The festival will bring people together and showcase creativity with projects reaching every corner of the UK. The projects will include events, public engagement activities, participation opportunities and learning programmes reaching millions of children and young people, demonstrating the importance of creativity in people’s lives and our collective futures.

The StoryFutures project is an experiment in film, broadcast and augmented reality, public archives, digital access and immersive storytelling asking who are we? Where did we come from and where are we headed? The project will draw on the partnership between the British Film Institute and their world-leading heritage in film, Uplands TV and broadcaster and film-maker, David Olusoga. Our partnership also includes design led cultural experts ISOdesign, immersive experience producers Nexus Studios, and placemakers and event specialists Produce UK. And with the support of The Reading Agency and their network of libraries we plan to engage communities across the UK. 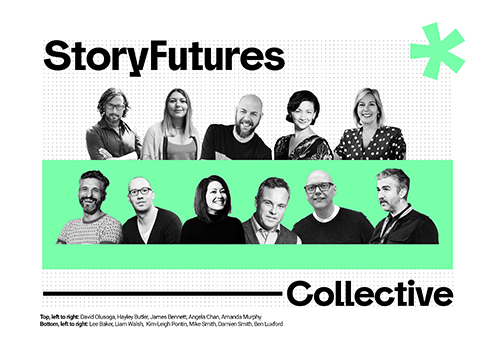 Professor James Bennett, Director of StoryFutures, said: “StoryFutures Academy is delighted to be leading this extraordinary team of STEAM creatives who are all passionate about exploring how immersive storytelling can help us link our past, present and future. With Festival UK* 2022 we believe this project can have a significant and positive impact on our creative industries and the brilliant talent we have in the UK. We are thrilled that David Olusoga will act as creative lead for the partnership, and we believe this team can inspire a national conversation about what identity means to people across the UK.”

Full details of the festival commissions are being kept under wraps to allow the creative teams to turn their ideas into reality, but projects will take us from the land, to the sea, to the air and even outer space, using pioneering technology and the power of the imagination. The festival programme will be announced, along with a new name, later this year.

The festival’s paid research and development (R&D) project has to date supported more than 500 creatives from across STEAM, including more than 100 freelancers, at a time when sectors have been impacted by the Covid-19 pandemic. More jobs and opportunities will be created as the commissioned projects go into production.

The 30 teams participating in the paid R&D project worked under a Creative Commons license and what they produced will become a publicly accessible resource to inspire future generations. The festival will continue to offer support to the 20 teams whose project ideas were not taken to commission, and where they want to develop them further.