The BBC and the National Film and Television School (NFTS) have struck a new three year deal to support emerging talent – which expands the BBC’s creative input into the School, and brings dividends for diversity, Nations and Regions skills development and small independent production companies.

The new pan BBC partnership straddles BBC Television commissioning, Children’s, Sport, BBC Studios, BBC Film, BBC Academy, BBC Scotland and BBC Wales. The breadth of the partnership is an industry first and will strengthen the BBC’s relationship with new and diverse talent at a time of intense global competition in the UK. 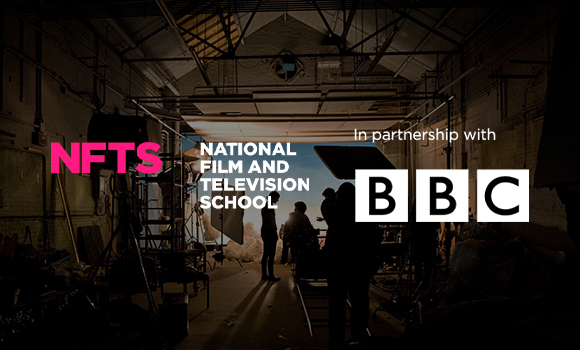 With a graduate employment rate of 91% and with 1 in 4 of its student body and recent graduates being Black, Asian or Minority Ethnic, the NFTS runs more behind-the-camera courses than any other film school in the world. The deal will include a newly developed scholarship scheme which will enable up to 20 diverse students to benefit from the high quality of teaching at the school, and strengthen the off-screen diversity talent pipeline. All courses are designed to equip students with the essential skills needed to make an impact in the film, television and games industries as soon as they graduate.

The partnership will also create a strategic educational partner for the BBC to strengthen skills development in the Nations and Regions, through NFTS hubs in Glasgow and Leeds. As part of the deal, the NFTS will provide 60 free short course training opportunities for the BBC’s small indie fund companies, two-thirds of which are based outside London.

The ground-breaking partnership means the BBC will now sponsor 10 NFTS courses – six MA’s and four diploma courses, and have up to 20 BBC scholars funded by the BBC, each with a commissioning or production mentor, as well as 100 free NFTS Short Courses places overall. Senior Commissioning and production figures at the BBC will provide masterclasses and join networking events to get to know the students, on some courses they will have first look deals, and BBC Studios will co-sponsor the school’s annual graduation ceremony and annual Gala. The BBC will provide career guidance and work experience placements and link students to a range of other BBC opportunities as required.

Charlotte Moore, Chief Content Officer says: “The BBC wants to back new talent and be the place they bring their best work. This ambitious new partnership raises the bar on what’s gone before. The NFTS is a world class education provider, whose alumni have gone on to work on some of the most outstanding content of our time.  This represents a long term, wider BBC commitment to supporting the UK creative sector. Strengthening our creative input to build stronger links with new and diverse talent at the start of their careers is vital. For the NFTS to play a more active role in addressing skills gaps and inform our out of London requirements couldn’t come at a more important time by providing a direct link between new talent and our editorial teams.”

Jon Wardle, NFTS Director added: “We are thrilled to partner so closely with the BBC. The scale of this three year commitment clearly demonstrates the breadth of talent we attract and nurture at the NFTS and the impact our students go on to make upon graduating. Creating ever stronger links and routes into the industry is crucial for us so we can continue to widen the pool for future emerging talent and usher in new voices and fresh perspectives to the creative sector.”

As part of the 20 scholarships, BBC Sport will also provide two bursaries on the Sports Production diploma. Find out more at nfts.co.uk/bbc-scholarships